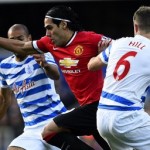 Reports are out claiming that Premier League rivals are keeping tabs on Radamel Falcao’s situation at Manchester United.

The Sunday Times reported that Arsenal, Liverpool and Manchester City are all monitoring Falcao.

The on-loan Manchester United man is in and out of the United team and is looking increasingly unlikely to have his move made permanent – at the cost of £43million – at the end of the season.

And with his future in doubt, the Premier League’s big guns are said to be watching him, hoping to swoop for a smaller transfer price if he is returned to AS Monaco at the end of the campaign.

The Colombian international played the full 90 minutes at QPR for United on Saturday afternoon, but had previously been dropped by Louis van Gaal.