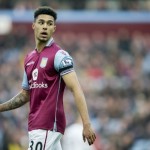 The Mirror says Tottenham, Arsenal, Manchester City and Liverpool are all keeping tabs on the 17-year-old winger.

And they sent their top scouts to watch the pacy wide man in action for Villa’s under-21s against West Brom this week.

Green has been at Villa since the age of nine, made his under-21 debut aged 15 and is rated by club staff as an even better prospect than Jack Grealish.