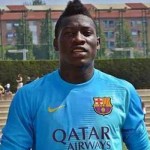 El Mundo Deportivo says Manchester City and Arsenal have both posted scouts to watch the Barca B keeper this season.

Ajax have approached Barca about Onana’s availability, having been impressed by his performances in their UEFA Youth League ties this season.

Barcelona Only Given €40 Million To Spend On Reinforcements

Theo Walcott : It Is Time Arsenal Won Something!