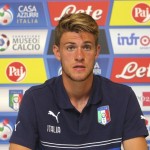 Reports are out claiming that Juventus defender Daniele Rugani remains on the radar of Premier League clubs.

The Juventus centre-back started the 1-0 victory over Slovenia at the Mapei Stadium in Reggio Emilia on Tuesday evening.

The defender is yet tot see action for the Bianconeri this season.