Reports are out claiming that Anderlecht midfielder Dennis Praet is back on the radar of Premier League clubs. 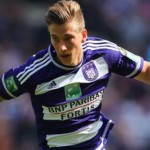 The Mail on Sunday reported that Southampton are chasing Praet.

The 21-year-old Belgium international has been a target for Bayern Munich and Zenit St Petersburg while Manchester City and Arsenal also checked on his progress earlier this year.

Praet, who can play as a winger or playmaker, has recently changed agents joining Stellar Group who also manage Gareth Bale and Southampton’s James Ward-Prowse.