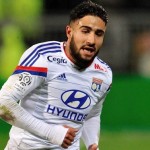 Reports are out claiming that Arsenal and Manchester City have been encouraged in their pursuit of Lyon midfielder Nabil Fekir.

Fekir’s father has confirmed the interest of the Premier League duo, though he insists the midfielder would only consider a move to Arsenal.

L’Equipe says Fekir is now seeking a new contract and is demanding a pay increase TEN TIMES of his current salary.