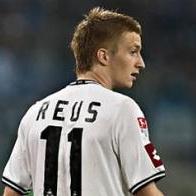 The Sunday Mirror says the two Premier League clubs have constantly watched the 22-year-old midfielder continue to impress in the Bundesliga this season and sources in Germany expect them both to make a move in the January transfer window.

Moenchengladbach rate Reus at £15million, but are worried his valuation may start to fall with just over two years left on his contract.

They bought him from Borussia Dortmund for £800,000 just over two years ago and he has quickly established himself as one of the most exciting players in the country.