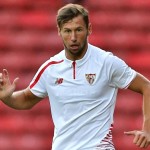 Reports are out claiming that Sevilla midfielder Grzegorz Krychowiak is a target for Arsenal and Manchester City.

Wenger considered a bid for Krychowiak in January but he instead moved for £5m Basel man Mohamed Elneny.

But Wenger won’t get his man easy as Guardiola wants to take him to Manchester City.

He is eyeing the Poland midfielder to play in midfield and provide cover at centre-back.