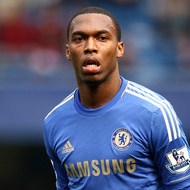 Arsenal and Manchester City are ready to pounce for Chelsea striker Danny Sturridge.

Sturridge has been weighing up his options at Chelsea and will be left non-plussed by news today that they’ve failed with a bid for Wigan Athletic attacker Victor Moses.

City boss Roberto Mancini would love to bring Sturridge back to the Etihad, while Arsenal have also been linked with the England hopeful since the end of last season.

Andy Carroll Warns Man City : I Am Due A Goal!