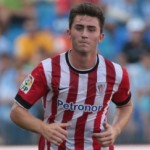 Reports are out claiming that Athletic Bilbao’s Aymeric Laporte has emerged on the transfer radar of Manchester United.

The highly-rated 20-year French centre-back is already a target for Arsenal but is now attracting interest from Red Devils boss Louis van Gaal.

It has been suggested that Gunners boss Arsene Wenger is prepared to meet Laporte’s £34million release clause in January but will now receive competition from United who are also believe to be preparing a winter offer for the France U21 international.

Arsene Wenger : We Are Only Focused On The Premier League