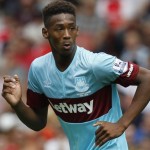 Reports are out claiming that Arsenal are ready to bid for West Ham defender Reece Oxford.

The Mirror reported that Arsene Wenger is plotting a move for Oxford .

Manchester United, Chelsea, Manchester City and Arsenal were all interested in the teenager before he committed himself to West Ham. United could also come back next summer.

But Arsenal now believe they have made a mistake and are ready to go back for the versatile West Ham starlet who turns 17 on December 15.

It could cost them around £8m next summer because he would have two years left on his first professional contract at Upton Park.