Reports are out claiming that Premier League clubs have been encouraged by Gonzalo Higuain’s ‘humiliation’ during their defeat to Sassuolo. 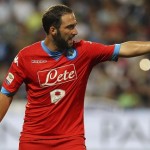 The Argentine international striker was handed a start by Napoli coach Maurizio Sarri, but was hooked on the hour mark as Sassuolo dominated.

Gazzetta dello Sport claims that Higuain felt ‘humiliated’ by Sarri’s decision, particularly with the coach choosing to substitute him ahead of the ineffective Dries Mertens.

Higuain has been linked with a move to England his summer, where Arsenal, Manchester United and Chelsea have all been mentioned as potential destinations.

It’s claimed Sarri chose to hook Higuain to stamp his authority on his squad, despite the poor opening day result. Doping May Exist In Football, But Definitely Not At Arsenal! – Arsene Wenger