Reports are out claiming that Premier League clubs are circling Olympique Marseille for Florian Thauvin. 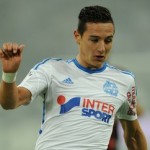 The 21 year old attacking midfielder is weighing up slapping in a transfer demand ahead of the January market as he becomes increasingly frustrated over the lack of regular first team football he’s seen this season.

Thauvin is also unhappy with the lack of progress over new contract talks.

Thauvin is a current France U21 international.