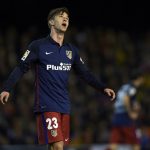 Atletico coach Diego Simeone is willing to see the Argentine sold this summer.

His agent Jorge Cyterszpiler has stated there’s as many as “15 clubs in contact” regarding the striker’s availability.

Barcelona, Valencia, Sevilla and former club Villarreal are all being linked.

And El Mundo Deportivo says Arsenal and Manchester United have asked Cyterszpiler to keep them up-to-date this summer over Vietto’s situation.

Chelsea And Arsenal Were Worried About Losing – Jose Mourinho