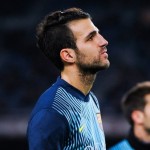 It has been reported that Barcelona are inviting offers for Cesc Fabregas.

Marca reported that the former Arsenal captain has been put up for sale by Barca.

It is said that the Spanish giants believe they can rake in over €40 million for him and hope to soon hear from the Gunners, Manchester City and Manchester United.

Cesc isn’t clear about his future and plans talks with Luis Enrique to see what the new manager’s plans are.