It has been revealed that Premier League giants are queuing for Vitesse Arnhem youngster Thomas Buitink. 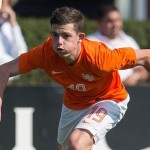 The Mirror reported that Manchester United will battle Manchester City, Chelsea and Arsenal for Buitink.

The 15-year-old striker has scored over 100 goals for Vitesse’s various youth teams and is a Dutch Under-16 international.

Chelsea’s links with the Eredivisie club could see them emerge victorious in the fight for Buitink’s signature.