It has been reported that Atletico Madrid midfielder Mario Suarez is on the radar of Premier League clubs. 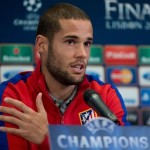 Marca reported that the defensive midfielder is being closely followed by a number of English top-flight clubs who are ready to pounce this winter.

AS Roma are also keen on the 27-year-old, but with both Arsenal and Manchester United eyeing defensive reinforcements the Premier League seems a more likely destination.

Having dropped out of head coach Diego Simeone’s favour this season, Suarez is reportedly frustrated with life at the Vicente Calderon, with his agent ready to find him a new club.