Transfer news are out claiming that Arsenal and Manchester United are keeping tabs on Dutch sensation Jeroen Lumu. 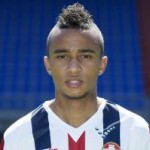 The People reported that the 18-year-old Holland youth international is already playing first-team football for Eredivisie side Willem II.

He can play either on the wing or up front and has two league goals to his name since breaking into the first team last year.

Both Premier League outfits have had him watched and could even try to bring him to England this summer.

Aston Villa and Fulham were also linked with Lumu in January.