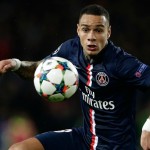 The Holland international fullback has endured a spiky relationship with PSG coach Laurent Blanc this season.

And Van der Wiel’s future has been cast in further doubt with PSG announcing a permanent deal for Serge Aurier.

Liverpool and Arsenal have been linked with Van der Wiel this season.