Reports have emerged claiming that Manchester United and Arsenal are monitoring Zlatan Ibrahimovic’s situation at PSG. 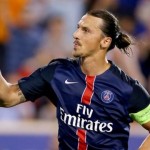 The Daily Mail reported that the striker has been told he can leave Paris St-Germain before the window closes as the French club looks to cut costs.

United are yet to make a formal approach for Ibrahimovic but Louis van Gaal is short of options up front.

Premier League rivals Arsenal are also thought to be keen on the forward.

Ibrahimovic bagged 19 goals for the French champions last term but they now consider his wages to be excessive – especially after splashing out £45m on Angel di Maria this summer.