Reports are out claiming that Premier League clubs are queuing for PSG midfielder Blaise Matuidi. 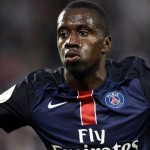 The France international, says Le 10 Sport, has been followed this season by Manchester City, Chelsea, Arsenal and Manchester United.

Matuidi’s agent, Mino Raiola, told RMC: “He stayed at PSG for his heart. He wanted to stay even if the top ten European clubs wanted him.

“He has a good contract here. It is too early to talk about the market. Anyway, the winter transfer window is a repair market, as they say in Italy.