It has been reported that Liverpool face stiff competition for Anderlecht midfielder Youri Tielemans. 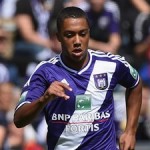 The Belgian teen, tied to Anderlecht until 2016, is looming as a January target for Reds boss Brendan Rodgers.

For Anderlecht’s Champions League defeat to Borussia Dortmund, Tielemans was watched by a huge number of clubs.

Hargreaves Believes He Can Still Make It To South Africa