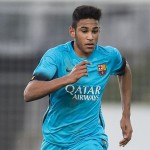 The Daily Express reported that Arsenal, Chelsea and Manchester United are following the 16 year-old prospect.

M’Boula is an attacking midfielder and recently agreed a new deal with Barca, which includes a €3 million buyout clause.

The teen has been likened to Arsenal legend Thierry Henry.