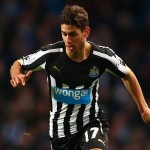 Reports are out claiming that Manchester United and Arsenal are watching Newcastle United striker Ayoze Perez.

The Daily Star says reports in Spain claim the Premier League dup are interested in signing Perez, and will launch respective offers in the summer.

Perez has enjoyed an encouraging start to life in England, netting five times in 27 league appearances – one more than Radamel Falcao.

His work ethic, quality and pace make him ideally suited to the frantic pace of the Premier League.

Managerial legend Sir Alex Ferguson is even said to have been taken by the 21-year-old’s eye-catching performances.