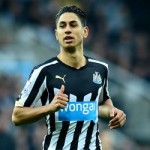 The Spaniard only joined in the summer from Tenerife, but has been outstanding this season.

Perez chose Newcastle ahead of offers from Real Madrid and Barcelona.