It has been reported that the agent of Aston Villa captain Ron Vlaar says there’s been no movement over new contract talks. 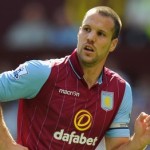 Vlaar’s agent Arnold Oosterveer confirmed that Southampton showed interest last summer but that he opted to stay at Villa Park for one more season.

Oosterveer would not be drawn on interest from Manchester United and Arsenal but said: “We have not spoken to Aston Villa, the club have not requested talks with us.

“The ball is with Aston Villa. Ron is in a situation which is not unfavourable. We are in no hurry.

“I don’t want to respond [to rumours about Arsenal and Manchester United], but the natural break for Ron is now and it’s the time to take a nice step. He is ambitious.”

He also told Voetbal International: “Last summer, Southampton were interested in Ron. But we asked ourselves whether that club would be a step forward compared to Aston Villa. Now that club are suddenly second, so things can happen quickly.”