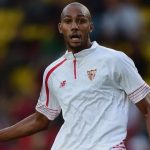 Reports are out claiming that Steven N’Zonzi is the subject of plenty of Premier League interest.

The French midfielder enjoyed a successful debut season in Spain with Sevilla, making 46 appearances in all competitions on the way to the Europa League title.

The Daily Mirror is reporting that the former Stoke City star is open to an England return and is his situation is being monitored by Liverpool, Manchester United and Arsenal.

It is believed that Premier League champions Leicester City recently had an £18million bid for the 27-year-old rejected which may dent the hopes of the Reds, United and the Gunners.