It has been reported that Barcelona have set a €25 million asking price for Alex Song. 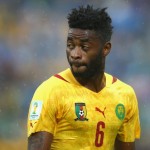 Marca claims that Barcelona are looking to sell him back to the Premier League, where, given his past with Arsenal, there is a greater chance of finding a buyer.

They’re looking to cash in on the player and have put a €25 million price tag on his head – an amount that for now no club is prepared to pay as Barça have not received one single offer for the Cameroon international.

Liverpool, Manchester United and former club Arsenal have been linked with the Cameroon international in recent days.

David Villa Hopes To Join FC Barcelona In The Summer