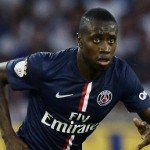 Reports are out claiming that Blaise Matuidi is ready to leave PSG this summer.

Le Parisien reported that Matuidi has decided to seek a transfer from PSG at the end of the season.

Former United coach Phil Neville admits they scouted the midfielder last season: “We wanted to sign him. We were really interested.”

Mikel Arteta : We Showed That Arsenal Is Not Dead!

Arsene Wenger Pleased With The Performance Of Yaya Sanogo