It has been reported that Bayern Munich midfielder Mario Gotze admits moving abroad is in his career plan. 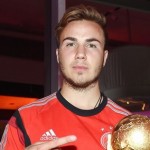 The German international has put Arsenal, Chelsea and Manchester United on alert by admitting he wants to play in a foreign league.

He told Bild: “I am very, very happy to be playing at Bayern, in Germany.

“But I might play for another 14 years, and a move abroad would certainly not be bad.

“A foreign country would also be tempting for someone of my personality, but I have not given it serious thought yet.” Arsene Wenger Delighted With The Performance Of Serge Gnabry