Reports are out claiming that Manchester United have tabled a bid for Real Madrid misfired Sami Khedira. 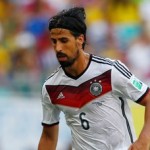 El Confidencial reported that Real coach Carlo Ancelotti has given his green light for Khedira to be put up for sale.

This has immediately attracted an offer of £20 million from United for the Germany international.

However, Real won’t jump into a quick sale, aware that Arsenal have also expressed interest.

Ancelotti is happy to sell Khedira as he wants Sporting Lisbon midfielder William Carvalho to be signed as his direct replacement.