Reports are out claiming that Rennes ace Paul-Georges Ntep is attracting interest from England’s biggest clubs. 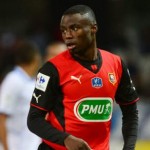 RMC reported that Arsenal, Manchester United, Chelsea and Manchester City all had scouts posted to see Ntep in action against AS Monaco last week.

And Ntep didn’t let them down, producing a matchwinning performance against ASM.

Though he did not get on the scoresheet, Ntep had Monaco coach Leonardo Jardim saying afterwards: “Ntep won them the game.”

Rennes snapped up Ntep, a France U21 international, from Auxerre for €5 million and won’t sell for less than double that figure now.