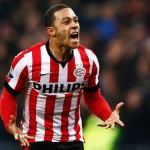 It has been reported that PSV Eindhoven are weighing up whether to cash in on Memphis Depay.

Manchester United, Chelsea, Arsenal and Liverpool have all been linked with the Dutch winger.

A source close to PSV told FootMercato: “He is being tracked after his successful World Cup and performances for PSV.

“Many clubs have made approaches for him next summer but something could still happen this winter.

“The big four English clubs are very interested. So are the five German clubs with the best budgets and also Fenerbahce.

“PSG are very interested in him and Memphis appreciates Paris. He would be happy to join such a big club.”