It has been reported that Premier League clubs are maintaining their interest in Olympique Marseille midfielder Giannelli Imbula. 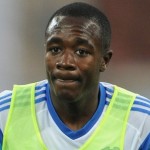 France Football reported that Arsenal, Chelsea and Manchester United are scouting regularly Imbula, who is expected to be put up for sale by OM next year.

Chelsea’s French scout Guy Hillion has confirmed their interest in the past.

“I have seen [Giannelli Imbula] often. As soon as he gets the ball he is able to accelerate and break through the lines.

“He covers well, has good technique, great vision of the game, with a very good quality pass and a great left foot. He doesn’t have bad qualities for a midfielder,” he said.