It has been reported that Premier League clubs are circling Barcelona for midfielder Sergi Roberto. 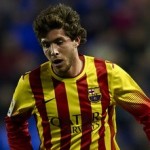 The Sunday Express reported that the 22-year-old, dubbed by Spanish observers as ‘the new Xavi’, has just one year left on his contract and is being eyed by Premier League trio Arsenal, Manchester United and Tottenham.

United were linked with a £6m move for the Spaniard during the January transfer window but a move never materialised.

Louis van Gaal has already signed Ander Herrera and Luke Shaw this summer as he looks to put his mark on a United squad that under-performed last season.