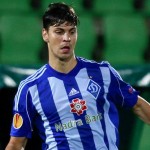 Reports are out claiming that Aleksandar Dragovic wants to leave Dynamo Kiev this summer.

The Austria international defender has been followed by Manchester United, Arsenal and Bayern Munich, says BILD.

Ukraine’s problems with Russia have concerned Dragovic, who is now seriously considering leaving the country.

The 24 year-old has expressed an ambition of playing in England.

However, Bayern’s interest has turned his head. The prospect of playing for Bayern coach Pep Guardiola is attractive for Dragovic.