Interesting transfer news are out claiming that Arsenal have joined the battle for Barcelona attacker Alexis Sanchez. 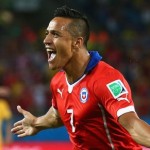 The Daily Star reported that the Gunners have joined Liverpool, Manchester United and Juventus in the race for Barcelona ace Alexis.

Reports from Chile suggest the 25 year old is fed up with playing second-fiddle to Argentine star Lionel Messi, and wants to quit La Liga, with a move to the Premier League his preferred option.

Liverpool and Manchester United are currently leading the charge of English clubs, but Arsenal could be set to gatecrash the market by declaring their interest in the 25-year-old. I Do Have A Sense Of Humour – Arsenal Boss Arsene Wenger Alisher Usmanov Desperate For One Major Signing At Arsenal