Alvaro Morata has admitted that he is unsure about his future at Juventus. 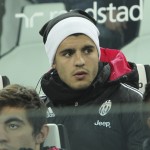 The Spanish international is being tracked by a number of clubs, including Arsenal, Liverpool and Manchester United, after an impressive spell in Italy.

Real Madrid can re-sign Morata for £26m, something their sporting director Emilio Butragueno is open to, and the striker hopes a decision is made in the near future.

“It’s difficult for me not knowing where I’ll be next season,” Morata told Cadena Ser.

“It’s a strange situation. I wish the matter could be solved soon. I’m happy here [at Juventus] but I want to know where I can buy a house.

“My return to Real is a concrete possibility because there is a deal. Butragueno’s words? I talk frequently with him. Being a Real Madrid is a pride for me getting messages from him after matches.”