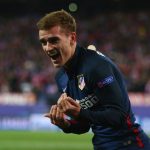 Reports are out claiming that Antoine Griezmann will not be leaving Atletico Madrid this summer.

Spanish football expert Guillem Balague has revealed that the French forward is set to snub interest from the Premier League in order to remain at the Vicente Calderon.

Chelsea have been heavily linked with the 25-year-old while Manchester United and Arsenal are also showing considerable interest, while an unnamed trio of English clubs are also in pursuit, but Balague is confident he will be an Atleti player next season.

“The plan is he stays for one more year and Griezmann is not in a rush to leave,” Balague told Sky Sports’ La Liga Weekly Podcast.

“He has not said no to the offers he has had and he has had offers from at least five Premier League teams.

“He’s going to think about it. The first intention is to stay on and we will see what happens there.”

Griezmann has this season scored 30 goals in 50 appearances in all competitions for Atletico who sit second in La Liga, equal on points with Barcelona, and are 1-0 up over Bayern Munich following the Champions League semi-final first leg.