Reports have emerged claiming that Antoine Griezmann has indicated that he has little desire to leave Atletico Madrid at this point in time. 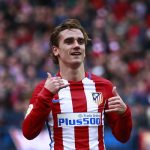 The France international star continues to be heavily linked with a summer move to Manchester United, while Arsenal are also showing significant interest.

However, Griezmann revealed after tonight’s 0-0 Champions League draw with Bayer Leverkusen that there are many factors that will decide whether or not he leaves the Vicente Calderon at season’s end.

“I have a contract. There has to be an offer,” Griezmann told BeIN Sports as Atletico advanced to the quarter-finals 4-2 on aggregate.

“The club has to want to sell me. I have to want to leave. Lots of factors.

“As I have said, I feel good here, my family is comfortable, which is the most important thing.

“There is sun here the entire year too, which also helps. I am trying to enjoy myself on the pitch.” Arsenal, Liverpool To Do Battle For Celta Vigo Striker Nolito