Reports are out claiming that Pierre-Emerick Aubameyang admits he’s considering his future at Borussia Dortmund. 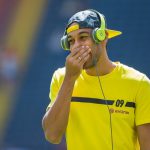 Aubameyang told Fichajes.com: “That is why I did not join my national team, I have had several meetings with the club to talk about my future.

Aubameyang has been linked with Real Madrid, Manchester United, Arsenal and Atletico Madrid this summer. He admits the departures of Mats Hummels (Bayern Munich) and Ilkay Gundogan (Manchester City) could sway his thinking.

“It will be strange to see two players leave who are part of the backbone of the team.

“But I’m sure the club has a plan to replace them.”