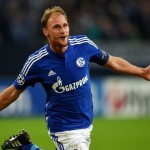 Reports are out claiming that Schalke defender Benedikt Howedes is weighing up whether to leave this summer.

BILD claims that enquiries are arriving from abroad for the Schalke captain, with a host of Premier League clubs now in contact.

Manchester United, Arsenal, Tottenham Hotspur and Newcastle United have all made contact with Schalke and Howedes’ camp in recent weeks.

“I feel extremely comfortable here, but I can also imagine at some point gaining new experiences abroad. England would be a target in this regard,” Howedes declared earlier this year.

The defender knows he faces a backlash from fans should he push to leave.

But he insists: “Schalke owes a great deal to me. Through my services I have helped the club to success. And I think that Julian Draxler and I as world champions have represented the club in a good light.”