It has been reported that Feyenoord defender Bruno Martins Indi wants to move to England after the World Cup. 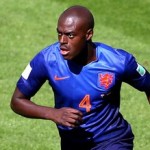 Feyenoord have been in talks with Porto over Martins Indi’s sale, however, Correio da Manhã says he’s rejected a move to Lisbon.

The defender was unhappy with the terms tabled and also would prefer a switch to the Premier League.

Martins Indi has been linked with Manchester United, Liverpool and Arsenal since the end of last season.