Reports have emerged claiming that Sevilla star Carlos Bacca is reportedly interested in a summer move to the Premier League. 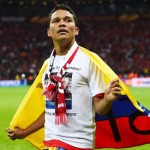 Spanish football expert Guillem Balague has suggested to Sky Sports News HQ that the Colombian striker, who has been heavily linked with Arsenal, Manchester United and Liverpool recently, is determined a transfer to England’s top flight.

“Carlos Bacca at the end of the season told Sevilla he would like a way out,” Balague said.

“Sevilla would like him to stay, but he does know there is interest from the Premier League and Italy.

“He likes the idea of coming to the Premier League, of course he has been abroad for a few years and would be happy to continue that progression abroad.

“Although Sevilla expect an offer, it hasn’t arrived yet.”