It has been reported that Cesc Fabregas has one foot outside of Barcelona after the missing the club’s photo shoot. 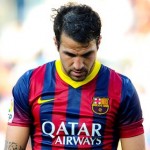 The Daily Express claims he has further heightened talk that he could move to Manchester United or Arsenal after he was left out of Barcelona’s kit launch.

All the big guns including Lionel Messi, Xavi Hernandez and Gerard Pique, but Fabregas wasn’t present.