It has been reported that the agent of Dani Alves has played down talk of leaving Barcelona for the Premier League. 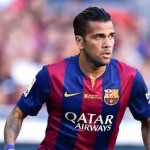 The Brazilian international fullback declared last week he would be playing in England in 2015, which has sparked rumours linking him with Arsenal, Chelsea, Liverpool and Manchester United.

But Alves’ agent and ex-wife Dinorah Santa Ana told local Catalunya Radio: “We would like to stay here, because our children are settled here.

“The club has never expressed a willingness to sell him.

“We currently are not negotiating with anyone, not with Barca or with any other club.”