Reports are out claiming that Benfica attacker Goncalo Guedes is delighted with his current form. 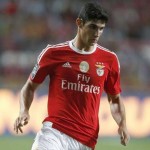 The youngster is being watched by Manchester United, Arsenal and Barcelona this season.

Guedes has just earned a first Portugal call and scored against Boavista.

“It was great, it makes me a very happy player. But it should be noted the work of the entire team, the coaching staff and the president.

“Without them it would not be possible to reach the national team,” said the player to BTV.