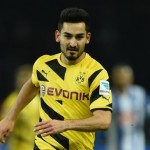 Reports are out claiming that Borussia Dortmund midfielder Ilkay Gundogan has priced himself out of a move to Bayern Munich.

The Germany international will be sold by BVB this summer after refusing to extend his current contract, which runs to 2016.

Manchester United and Arsenal are chasing Gundogan, who is also being linked with Barcelona this week.

BILD says Bayern had been in talks, but recently pulled out of negotiations after being shocked by Gundogan’s personal demands. Arsenal Ready To Bring Cesc Fabregas Back To The Emirates