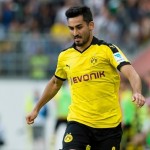 Ilkay Gundogan has admitted that he does not know what the future holds for him at Borussia Dortmund.

The 25-year-old German international midfielder has been constantly linked with Premier League clubs Liverpool, Arsenal and Manchester United in recent times and was widely expected to depart the German outfit this past summer.

Gundogan, who is enjoying a good run of form under new boss Thomas Tuchel, penned an extension that will keep him at the Westfalenstadion until the summer of 2017 but admits that he is unsure of what may follow as interest from top flight English clubs persists.

“There are no new developments as of yet. I am feeling very well at BVB and I know what I have at this club,” he told Bild.

“I believe everybody here at Dortmund wants to be back in the Champions League next season and anything else would be a major disappointment.

“But that does not mean that I will definitely leave if we don’t qualify. I’m not that kind of person. I would already have left last summer had that been one of the criteria for me.”

In regards to rumours linking him with a reunion with current Liverpool boss Jurgen Klopp, Gundogan was fairly non-committal: “They have a good team, a great coach.”