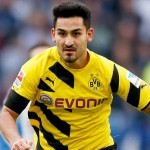 Reports have emerged claiming that Borussia Dortmund midfielder Ilkay Gundogan admits his future remains up in the air.

The German international star is about to enter the final year of his present BVB deal and has been linked with Manchester United, Arsenal and Bayern Munich.

Gundogan insists he could yet stay in Dortmund.

“We are considering everything. No decision has yet been made. I cannot say more than that,” declared Gundogan.

“Dortmund will continue with or without me. BVB is a great team and a great coach is coming. I do not know which team I will play with next season.” Arsenal v Chelsea – Who Will Win?